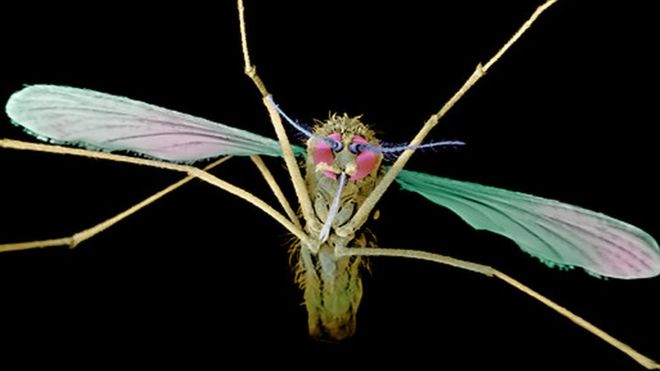 US scientists say they have bred a genetically modified (GM) mosquito that can resist malaria infection.
If the lab technique works in the field, it could offer a new way of stopping the biting insects from spreading malaria to humans, they say.
The scientists put a new "resistance" gene into the mosquito's own DNA, using a gene editing method called Crispr.

n theory, if these mosquitoes bite people, they should not be able to pass on the parasite that causes malaria.
About 3.2bn people - almost half of the world's population - are at risk of malaria.
Bed nets, insecticides and repellents can help stop the insects biting and drugs can be given to anyone who catches the infection, but the disease still kills around 580,000 people a year.

Scientists have been searching for new ways to fight malaria.
The University of California team believe their GM mosquito could play a pivotal role - breeding resistant offspring to replace endemic, malaria-carrying mosquitoes.
They took a type of mosquito found in India - Anopheles stephensi - on which to experiment.
Dr Anthony James and his team showed that they could give the insect new DNA code to make it a poor host for the malaria parasite.
The DNA, which codes for antibodies that combat the parasite, was inherited by almost 100% of the mosquito offspring and across three generations.
Posted by Prince rado at 01:08 No comments: 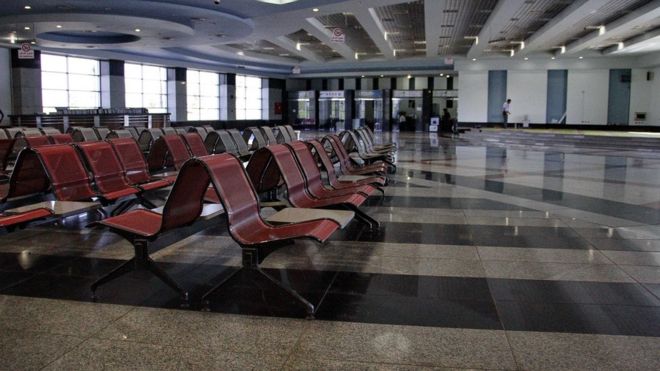 Easyjet has now cancelled all flights between the Egyptian resort of Sharm el-Sheikh and the UK until 6 January.
The airline, along with other carriers, had cancelled all outbound flights to Sharm el-Sheikh up to this week.
Easyjet said the latest move was to provide some certainty to passengers travelling over the Christmas period.
Flights were halted after the UK government said the Sinai plane crash, which killed 224 people on 31 October, may have been caused by a bomb.
Easyjet said customers on affected flights could go to another destination, receive a full refund or get a flight voucher for future travel.
People wanting to travel back to the UK have been asked to contact the airline's customer service team.
"We are sorry for the inconvenience this will obviously cause, but we hope that being clear with all our customers at this point helps you to manage your plans with more certainty.
"The situation is beyond our control and passenger safety will always be our number one priority."
Last week British Airways announced that outbound flights from the UK to Sharm el-Sheikh would be cancelled until 17 December.
The airline said it would keep the situation under review and give customers as much notice as possible.
Posted by Prince rado at 00:59 No comments:

Mr Morris and his fellow miners said they survived by eating cockroaches, frogs and other insects


Onyiwa Morris, 55, had digestive system complications after being admitted to hospital last week, his doctors said.
The other four men are still receiving treatment at the Kahama District Hospital, where doctors say their health is improving.

The miners survived on roots, soil, and insects after a shaft collapsed, blocking their exit from the mine.
Many Tanzanians have been touched by their survival story, turning up at the hospital with gifts.
These are likely to be gratefully received, given that many of the men’s possessions had already been shared out among family members, who presumed they were dead,
Many people search for gold in unregulated mines in remote areas of Tanzania in the hope of becoming rich.
The incident took place at a mine in the north-western Shinyanga region, 900km (500 miles) west of Dar es Salaam.
Posted by Prince rado at 08:13 No comments:

A student from Kenilworth is preparing to climb Mount Kilimanjaro in Tanzania next summer to raise money for a cancer charity.

Amy Durham, who studies law at Cardiff University, aims to raise £1,500 for Worldwide Cancer Research between now and the start of the climb in August. Every penny given will go towards the charity, as Miss Durham is paying for the trip’s expenses out of her own pocket.


The former Kenilworth School pupil and Castle Sixth Form student will be part of a 35-strong team aiming to tackle Africa’s highest mountain over the course of six days.
She said: “I’ve never done anything like this ever, so it’s going to be a real challenge for me and it’s definitely going to push me out of my comfort zone.
“I think the biggest struggle will be coping with altitude sickness.”
Worldwide Cancer Research fund research into any type of cancer anywhere in the world, including research at academic institutions like Cardiff University.
You can sponsor Hannah’s climb by visiting k16cardiff.everydayhero.com/uk/amy-s-mount-kilimanjaro-climb.

BUJUMBURA, Burundi (AP) -- At least four people were killed in overnight violence in the Burundi capital, the police said Sunday as sporadic gunfire and loud explosions continued to echo across the city.
A local human rights activist, however, said up to seven dead bodies had been discovered and blamed the police for the killings.
Bujumbura has been wracked by violence since April when the president announced he would seek a third term, sparking violent street clashes and a failed coup attempt.
Opponents and supporters of the president appear to be targeting each other in revenge attacks, raising fears of a possible return to civil war.
Deputy Police Spokesman Moise Nkurunziza said that three of the victims died in the northern neighborhood of Ngagara, while a fourth was killed in the southern neighborhood of Kanyosha. At least 28 people were arrested overnight, he said.
But Anschaire Nikoyagize, the president of the Burundian League for Human Rights, told The Associated Press that seven people had been killed overnight in confrontations with the police, with some tortured and beheaded.
"Relatives of the victims told us those who were killed were thought to be connected to people opposing (the president's) third term," Nikoyagize said, adding that shootings and explosions were still going on in Bujumbura Sunday afternoon.
A military official, speaking on the condition of anonymity because he was not authorized to speak to a reporter, said there was an explosion inside the water and electricity company.
The U.N. has cited at least 240 deaths since April, but the real toll is likely much higher.
Burundi also has a history of deadly conflicts between the country's Hutu and Tutsi ethnic groups.
Nkurunziza took power in 2005 near the end of a civil war in which some 300,000 people were killed between 1993 and 2006.
Posted by Prince rado at 07:47 No comments:


Our highly placed sources in the Madiba land have revealed that Bebe Cool met TMT Africa boss Cameroon Gitawo and Shaffiq Katumba who is known as Katsha De bank.
“They had a meeting and discussed on how to promote the yet to be launched TMT record label,” confirmed the source.
This website understands that TMT music promotions will be launched on December 30, at the industrial area based club Guvnor at a party dubbed Money and Gold.
The label already has offices in South Africa, Tanzania and Kenya.
“We are already working in Kenya, South Africa and Tanzania. Currently in East Africa, we are trying to identify talent and soon we will be signing musicians,” confirmed Gitawo
This website understands that the launch of the label in Uganda will see the group inject Shs1billion to ensure that the signed musicians get maximum attention while grooming their talent.